Member Poll What questions would you like to ask a straight male escort?

We have a UK-based heterosexual male escort service that wants to write a guest post for Girls Chase.

Partly they want backlinks to their site. They also say they tend to recruit as escorts men with backgrounds in seduction, since... apparently seducers make good escorts.

I already asked them (purely for research purposes) what sort of clientele they serve. The response from their manager (a chap named Simon) was as follows (I said I presume they're not picking up 20-something rich girls from parties like Jon Voigt in Midnight Cowboy):


Also, you're right, we're not the Midnight Cowboy kind of a service. As for our clientage, we mostly have strong, independent women who have had less time to focus on relationships owing to the hectic careers and the strings that come with relationships. They mostly want gentlemen for plus-one at events, casual hangouts or dates, where they can blow off some steam or maybe even where they want to make their ex jealous with an even more good looking man, haha! ​
They've offered to do a Q&A with their male escorts. Simon says (never thought I'd write that out):


Sure, we can do a Q&A interview session with our gentlemen. ​
​
We can get them to answer the questions you or your readers might have regarding the nature of the job or industry and even get them to share some real stories about their varied experiences.​
​
However, this could only be in a written form as most gentlemen want to keep themselves anonymous.​
So... here's your chance.

What would you like to ask professional straight male escorts serving female clientele?

Let me know here and if it's a good question I'll get it rolled into our questions for them.

It would be interesting to hear about the world of male escorts, thanks for the chance to ask some questions. These questions come to mind:

I’d like to know if these women tend to get attached.

Also how attractive is the average customer?
I guess there’s got to be some surprising bombshells who pay for the service but the regular Jane… is she a girl who is just a little distracted in her career or has she really sacrificed her attractiveness for it.

Have you ever been so repulsed by a customer's physical appearance you couldn't get it up? Did you make it work, or did you do something else?

Besides money and sometimes sex, what other benefits do you get from this job?

What kind of guys do you hire? What makes a great male escort? How much do looks matter in this line of work?

Would you date any of your customers if you hadn't met them from work?

Will you do anything with the ass? Or is Frank Reynolds gonna have to slap a bitch

Where can I fill out a job application

What do the women value the most from these guys - what 'custom options' are the most popular?

Starboy said:
Where can I fill out a job application
Click to expand...

I’m not joking you know..

I’m in the UK.
how much they paying?
do they have a height restriction? (short guy here)
W

Love to hear about the unreasonable and reasonable expectations of the clients.

Some questions, also Chase if you feel these questions have potential on some level, but need to be phrased a little better(sometimes I get a little to ahead of myself) then go ahead and change what you feel is necessary to make it work.

For female hookers, they tend to be hired by some unscrupulous predatory men which changes their opinion for the worst. I wonder if male escorts get a worse or better opinion.

2.) What takes more priority for an male escort for women - being a good lover or a good conversationalist?

3.) In your opinion,do you think being a male escort has made you a better man? Have you learned anything about yourself that you didn't before, has it given valuable life experience? Has it made you more confident, , or wise in the ways of women?
Last edited: Jul 3, 2021
J

1.) Are there certain boundaries you are never allowed to cross as a male escort? Can you only stick to what is ordered, or can you take a different direction on your own initiative during service if you think it makes for a better romantic or sexual experience?

Or is it better to stick to the script for contractual obligations, and elimination of risk to the business if it upsets the client?
Last edited: Jul 3, 2021

- What are the age of the clientele? Is it a wide variety or is it exclusively the forty plus crowd.

- Do they require themselves to be muscular *[work out etc... or is there no concern?

- What sort of sex are clientele looking for? Full range or just simple anal/vaginal.

- do they wear a condom

is my description of what i have seen accurate on this video or is it different in uk:

@Chase will you let us know when it's published? I don't go much to the main site these days
D

I’m in the UK.
how much they paying?
Click to expand...

ditto - could be both ineresting and fun

Sweet. Thanks for these, gents.

Assuming all goes well, once we've got the article up I'll post the link to it here. 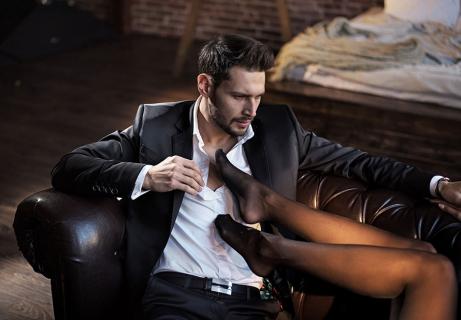 Q&A with a Straight Male Escort

Q&A with a straight male escort: what kinds of women use escorts? What do they expect in an escort? What has escorting taught you about the opposite sex? And more… In this guest post, a veteran (straight) male escort from the the UK's straight male escort service Gentlemen-4-Hire talks about his...

Bit surprised at how much the male escort thing seems to be about the guy listening and paying attention, I thought it would be more skewed toward her 'showing off' in a social setting. But then I'm probably thinking from a guy's perspective.

Also, the fact that women are so sick of crappy dates that they'll hire a guy to talk to, seems like good news for smooth daygamers who know how to take things off the beaten track.
D

As said I'm surprised how much it's about listening to them. I can only conclude that most men don't listen to women, or at least don't make her feel he is listening by relating to her.

Will_V said:
Also, the fact that women are so sick of crappy dates that they'll hire a guy to talk to, seems like good news for smooth daygamers who know how to take things off the beaten track.
Click to expand...

I always thought there was a lot of competition from other men. It would appear that for those of us who have basic fundamentals there isn't much at all. The main problem is being seen in the crowd of men that are out there so that's somewhere to work on.

I was away on "staycation" in central London with friends last week and I witnessed:
-a couple in an upmarket Pizza restaurant clearly on a first date. They only had a coffee but he spent 90% of the time talking and she only about 10% - no balance or getting to know her. He was dressed in a Polo shirt that was clearly not new and was out of shape - so no sense of personal worth. She was quite attractive with a pretty smile although her body language said she was very nervous.
-we went to a singles party on Saturday night that was 60% ladies and 40% men. The dress code was detailed as "smart summer party wear". Most men were in outdated badly fitting jeans with an old polo type shirt or very similar and a fairly poor hair cut, only a few of us wore trousers and shirt. Virtually all ladies were wearing party dresses and looked good - even if they weren't my choice - they had still made an effort - again very little competition. I got loads of dances, plenty of conversations initialed by women and several ladies asked me if I had my own room or was sharing where we were all staying - and I wasn't even looking to take anyone home as I was just out with friends for the night.

Sorry if second part is a bit off topic - but it only seemed to re-enforce what the article said.

"To be honest, most aren’t particularly attractive. The average age is probably 35–50. I rarely get a booking from someone that’s very unattractive, though; most are just average-looking. Maybe 1 in 10 is what I would consider attractive. Now and then, I’ll get a beauty, which is obviously a pleasant situation. However, I don’t mind what they look like, as long as they have some manners and are lovely to talk to."

This is pretty much what you would expect.
Women in demand easily attract the cream of the crop from the male population, so they are able to choose.
Regular women though must face the regular dating pool plus it's bumps and shortcomings.

However I'm a bit surprised by the massages and listening bits.
Guess I'm an anomaly, because I always preferred to let them talk during dates (and I always begin physical touching 5-10 minutes in, it's just natural for me).
Last edited: Sep 14, 2021
You must log in or register to reply here.
Share:
Facebook Twitter Reddit Pinterest Tumblr WhatsApp Email Share Link
Top